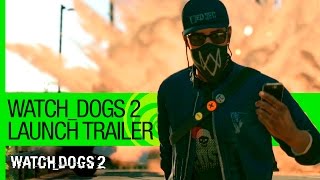 Join the notorious group of wacky hackers, DedSec, to expose the ugly truth behind corrupt Silicon Valley giants. Use your stealth and hacking skills as Marcus Holloway to fight the dangers of operating system ctOS 2.0. Play Watch Dogs 2 now on Skyegrid !

Join the notorious group of wacky hackers, DedSec, to expose the ugly truth behind corrupt Silicon Valley giants. Use your stealth and hacking skills as Marcus Holloway to fight the dangers of operating system ctOS 2.0. Play Watch Dogs 2 now on Skyegrid !

What is Watch Dogs 2?

Watch Dogs 2 is Ubisoft’s dynamic, open-world hacking adventure set in a fictional San Francisco Bay Area. As the main character Marcus Holloway, you get to hack your way into pretty much everything! Use your hacking skills to steal information from mega-companies with evil objectives. Expose corrupt offices and corporations with a team of witty and wacky hackers belonging to the notorious hacktivist group Dedsec.

What is Watch Dogs 2 about?

As a young and witty Marcus Holloway, you will find yourself wrongly accused of a crime you didn’t commit by the dangerous and upgraded operating system, ctOS 2.0, now installed in the city of San Francisco. To fight its nefarious surveillance plans, you’ll have to join the infamous hacker group DedSec. Along with your quirky hacktivists Josh, Horatio, Sitara, and Wrench, you can take down the evil Blume corporation. And other Silicon Valley giants that are harvesting and manipulating personal information of thousands of innocent citizens.

Hack into everything and anything using your phone to expose those who exploit people’s data for their own gains. Rip off corrupt mega-companies, expose pedophiles and infiltrate other firms to steal information. Hack with a purpose, hack for justice.

Who do you play as in Watch Dogs 2?

You play the action-adventure game as the brilliant hacker Marcus Holloway. You will join a notorious hacking group Dedsec. And you will take down an establishment that misuses technology to track people’s personal data for its own gains. Hack your way into the city, any electronic device or computer system in cars. Manipulate these to acquire and extend your abilities to reach your goals.

Ubisoft’s hacking action adventure is a third-person, open-world game. It’s set in a fictional San Francisco Bay Area which you can navigate on-foot or using quirky cars. Protagonist Marcus Holloway is a young vigilante hacker who’s out to expose the ugly truth lurking behind Silicon Valley giants.
As Marcus, not only are you capable of hacking into the entire city’s infrastructure using your phone, but you also have parkour and acrobatic skills. You’re free to decide how you finish off the game’s missions. You could go for a high-octane action ride, killing enemies with 3D printed guns. And you could also switch to a stealth mode, evading direct encounters.
What you’ll love about Watch Dogs 2 game:

Combine stealth and hacking to complete missions and many fun side quests. You can add custom-made soundtracks to make gaming more fun.

Is Watch Dogs 2 available on Android?

For now, Watch Dogs 2 is available on PC and consoles. There has been no official word on an Android release.

This is where Skyegrid , a cloud gaming platform, steps in. With Skyegrid you can:

No. Watch Dogs 2 is a full-priced AAA game by Ubisoft. A game like this would normally set you back 60$ at least, plus the cost of a console or high-end PC to play it.

Can Watch Dogs 2 be played offline?

Yes, Watch Dogs 2 can be played offline. However, the offline mode does not have all game functionalities.

Yes! The edgy, lone-wolf protagonist of the game’s predecessor, Aiden Pearce makes a small appearance in Watch Dogs 2. You can find him during one of the many side quests and missions that form a part of Ubisoft’s open-world hacking adventure.

What is the size of Watch Dogs 2?

As per its maker Ubisoft, you need 50 GB minimum available storage on your hard drive to install and play Watch Dogs 2.

The Pan European Gaming Information or PEGI rates Watch Dogs 2 as PEGI 18. The rating pegs the game as meant for adults only due to the frequent use of sexual expletives and activities and violence. There’s nothing in the game that you wouldn’t see in most 18+ games and movies though!

Can I run Watch Dogs?

At a minimum, you can run Watch Dogs 2 on a Core i5 processor with at least 6GB of RAM. The game works on Mac but the gameplay experience isn’t as good as PC. You can also play Watch Dogs 2 on your phone or smart TV using Skyegrid . Are you having trouble playing Watch Dogs 2 on your PC? Let Skyegrid take care of your hardware needs/concerns and enjoy playing the hacking adventure on any device of your choice.

Watch Dogs 2 can be played both online and offline. The offline mode, however, does not support all game functionalities.

How many people can play on Watch Dogs 2?

Watch Dogs 2 comes with a seamless multiplayer experience that offers both Co-op and Player vs. Player (PvP) activities. You can interact with other players online to explore the vast and vibrant fictionalized city of San Francisco and go on missions together.