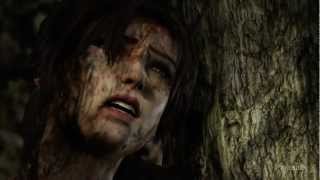 Join this intense and gritty saga of the bold Lara Croft. Raid tombs, find forgotten artifacts, solve puzzles and fight for survival to uncover the dark history of a mysterious island. Ready to embark on this dangerous journey? Play Tomb Raider on Vortex now!

Join this intense and gritty saga of the bold Lara Croft. Raid tombs, find forgotten artifacts, solve puzzles and fight for survival to uncover the dark history of a mysterious island. Ready to embark on this dangerous journey? Play Tomb Raider on Vortex now!

What is Tomb Raider about?

A reboot of the series, Tomb Raider is the tenth installment in the famous Tomb Raider game franchise. As British archaeologist Lara Croft, you get to find forgotten artifacts amongst deserted tombs and ruins in this 2013 reboot of the popular action-adventure franchise. Stranded and shipwrecked on a mysterious island, you have your instincts and endurance at your disposal to survive. Uncover the dark history of the abandoned island of Yamatai to escape its relentless hold.

What will you love about the Tomb Raider game?

If you love action and adventure, you’d love what Tomb Raider offers you. Use Vortex to play the game hassle-free on any device of your choice. The game will offer you amazing things like:
A compelling story and RPG-like progression elements will keep you hooked to this intense action-adventure game. You can use in-game currency (in this case Salvage) to upgrade your gear. You can collect weapons and replace your normal arrows with fire, napalm and explosive arrows. The game also allows you opportunities to level up as the British archaeologist Lara Croft. Become a close-combat specialist or improve your range attacks.
Ready to explore a world of grit and survival? Play Tomb Raider using Vortex cloud gaming platform and have an amazing gameplay experience.
You may also ask:

Is there a new Tomb Raider game coming out?

The 2018 Tomb Raider movie starring Alicia Vikander is loosely based on the 2013 Tomb Raider video game. The movie revolves around the fiercely bold and independent Lara Croft as the adventurer who sets off on a journey to investigate her father’s disappearance.

The latest Tomb Raider game in the series was called Shadow of the Tomb Raider, released in 2018. It’s available on the PC, PS4 and Xbox One but Vortex enables you to play the game on any device you prefer.

Which is the best Tomb Raider game?

This title in the series, Tomb Raider 2013, is one of the best games in the Tomb Raider game franchise. It has a high rating on Metacritic and was appreciated by millions of fans. It is applauded for reviving the classic Tomb Raider series.

Was Tomb Raider a game first?

Yes! Tomb Raider began as an action-adventure game series developed by British gaming company Core Design in 1996 for PC, PlayStation and Sega Saturn consoles. The first Tomb Raider movie “Lara Croft: Tomb Raider” came out in 2001 and was based on the game. It starred Angelina Jolie.

Can you play Tomb Raider online?

Yes, you can! Vortex cloud platform lets you play Tomb Raider on any device of your choice.

How to play Tomb Raider online / with no download?

Now you can experience the thrill of finding invaluable artifacts spread across the world as the legendary Lara Croft on any device. Use Vortex to enjoy the best gameplay experience. Play Tomb Raider on Vortex now!
GOT IT