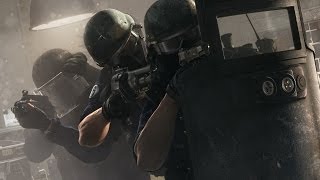 Are you ready to face intense close-quarters combat, high lethality, tactical decision making, team play, and explosive action within every passing moment? Power up your forces and march onto the strongholds. Play Rainbow Six Siege now.

Are you ready to face intense close-quarters combat, high lethality, tactical decision making, team play, and explosive action within every passing moment? Power up your forces and march onto the strongholds. Play Rainbow Six Siege now.

When was Rainbow Six Siege released?

What is the Rainbow Six Siege gameplay?

Tom Clancy’s Rainbow Six Siege is an online video shooter game that is slowly growing in player-base in recent years.

The fast-paced multiplayer game comes with a unique selection of Operators. It calls for strategic planning of close-quartered attacks that involves considerable destruction along the way. The game lets you be an attacker or a defender, each group having its exclusive set of skills and gadgets.

R6S raises the bar of current-day gaming with its unpredictability, involved depth of strategy and

What is the ultimate goal of Rainbow Six Siege?

What will you enjoy about the Rainbow Six Siege game?

The Rainbow Six Siege is becoming popular for these very reasons:

> You will have several operators to choose from, each of them having unique gadget functions

> You can gain an edge on your enemies with the help of surveillance cameras, operator gadgets and drones

> To kick it up a notch, academy award nominee and commander of ‘Team Rainbow’, Angela Bassett, will brief and debrief operators for every situation

Pick the simple operators so that you can understand your gadgets. This way you can focus on map navigations and firefights. Choose Montagne if you have issues surviving the game for long. His shield will protect you from enemy attacks.

Ash is a good attacker known for her speed and softcover destruction.

Rook and Doc are great for taking care of damages, healing the team and providing great angles of view while you are watching out for attackers.

Mute jams signals from enemy devices and Jager is excellent at gunplay.

What are some tips for Rainbow Six Siege beginners?

Here are some tips that will make you better at this game:

> Learn the operators you have at hand before acquiring new ones

> Don’t bunch up while you attack

> Use drones for attacking and cameras for defending

How can you become a Pro Rainbow Six Siege player?

Rainbow Six Siege is a high-precision, strategy-oriented game that requires careful planning of attacks and good teamwork. That means to get an understanding of it, it is mandatory to complete the situational tutorials FIRST to understand the maps, operators, and the various gadgets that are available for use.

There are about 20 different operators to choose from. You should try to play all of them to know which operator works best for you. This will help you familiarize yourself with their weapons and abilities.

With destruction being at the heart of the gameplay, use it as much as possible to your advantage. This will open several tactical avenues of playing.

If you are an attacker, use actions such as Sledge or Buck to tear down walls. On the other hand, if you are a defender, you can understand the strategy of the attacker and reinforce the walls to prevent destruction. You can see through opaque walls with actions like Pulse or use Valkyrie to lodge cameras down different streets and dodge enemies before they get to you.

Use the drones wisely. If you are an attacker, you get two drones. The first one that you get at the beginning of the game should be used tactically to look for enemy positionings and objective locations. The second one is available after the ‘drone phase’ which should be used to virtually look into the location you will be running into or jumping from. Beware - drones are destroyable and that is equivalent to a fallen soldier on your team!

It is primarily a multiplayer game to watch and play with your friends. It does not have a single-player campaign, but the Situations in the game serve as an equivalent to a single-player mode to hone your skills.

Yes. Rainbow Six Siege is an online game and so you will first need access to the Internet. To play Rainbow Six Siege, you will have to purchase the game online from Steam and also subscribe to Vortex. The game should then be downloaded and you will need to have a PC or console to play it.

On what devices can you play Rainbow Six Siege?

You can play Rainbow Six Siege on PCs with a Windows 7, Windows 8.1 or Windows 10 operating systems with a 64-bit (and upwards) machine, android mobile phone, or an Xbox console. For the PC and mobile phones, you can use Vortex to play this game online.

How can you play Rainbow Six Siege on Vortex?