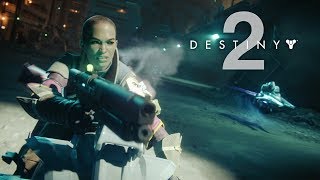 Become a Guardian and protect the last remaining humans from powerful aliens to prevent humanity’s extinction. Destiny 2 is highly immersive with its cinematic story mode and great visuals. With free to play and Cross Save enabled, experience the game better online with friends and communities.

Become a Guardian and protect the last remaining humans from powerful aliens to prevent humanity’s extinction. Destiny 2 is highly immersive with its cinematic story mode and great visuals. With free to play and Cross Save enabled, experience the game better online with friends and communities.

A superior sequel from the first Destiny. Bungie retains the almost perfect and satisfying shooting mechanics from the previous game. Complimented with gorgeous visuals and now with better storytelling, Destiny 2 will surely give you a great experience all-round.

Players assume the role of a Guardian, protectors of Earth's last safe city as they wield a power called Light to protect the Last City from different alien races.

Immerse yourself in Destiny 2

Explore and solve the mysteries of the solar system of Destiny 2. You can customize your Guardian according to your preference. Blended with MMO-style elements, you can unleash elemental abilities and play the game according to your style by choosing between different Guardian classes: Titan, Hunter, and Warlock.

Aside from the Guardian classes, Bungie made the gameplay of Destiny 2 deeper by having subclasses on each Guardian class. You can level up your weapons, gears, elemental abilities against powerful enemies as you progress on the game.

Is Destiny 2 a free-to-play game?

No need to wonder when will Destiny 2 be free because it is a free-to-play game for casual gamers and those who want to challenge themselves on competitive PVP, PVE, and other battle modes. This game surely caters to a broad type of gamers and surely you will love it too.

Available on PC, Xbox One and PS4. Is Destiny 2 cross platform you ask? Not really but it is Cross Save enabled.

You can load your Guardians on different platforms using a single account. Since Cross Save is enabled, you can enjoy the game more with your friends and other online communities by not worrying about which gaming platform you like to play. Maintain the level of the competition by maintaining your access to your own set of Guardians.

Don’t wanna be stuck at home playing this masterpiece of a game? Skyegrid is here for you.

With your Skyegrid subscription, you can play this game on your Android and other mobile devices. You can enjoy the game anytime anywhere. No installations, no hassles!

Plus, you can play hundreds of games in our library on the fly!

I Don’t Have A Game Console. What Are The Recommended PC Specs Of Destiny 2?

My System Doesn’t Meet The Requirements. Can I Still Play The Game?

Yes, you still can! You don’t have to waste a lot of money to play Destiny 2 because it is a free-to-play game. And for just $9.99 per month, you can play it on your old PC, Mac, smartphones anytime, anywhere.

By letting you play the game on 60FPS, Skyegrid allows you to stay competitive without owning a powerful gaming rig. You will experience the same on other games in our library too.

When Did Destiny 2 Come Out?

First released on PS4 and Xbox One on September 6, 2017. The PC version followed after a month on the Battle.net platform. Bungie now owns the publishing rights of Destiny 2 and is now available on Steam as a free-to-play game.

Where Can I Buy Destiny 2?

Can I Play Destiny 2 On Android Devices?

Is There a Destiny 2 Mobile Version?

Destiny 2 is only released on PS4, Xbox One and Steam (PC). Are you more of a mobile gamer? Then you don’t have to be disappointed. Thanks to Skyegrid Destiny 2 is available on your mobile devices.

Not only that! The game is also instantly playable! No need to wait by downloading gigabytes of data and updating the game. Best of all, you can do the same in hundreds of games in our library. Instantly satisfy your gaming crave on the fly!

How Can I Play The Game On Skyegrid ?

Once you signed up, all you need is login to your account. Choose Destiny 2 or any other hundreds of games in our library then play. No installations, no waiting for updates and no hassles.

And with your subscription to Skyegrid , you can load your Guardians on your mobile devices. Compete online anytime and anywhere. Instantly enter the battlefield whenever you feel competitive.