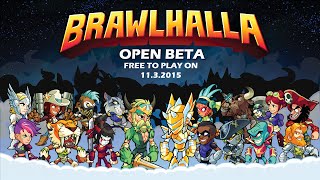 Looking for an action packed fighting game? Look no further! Knock your opponents from the platform and win! Use comps, weapons, and jumps. Improve your rating and become the best player!

Looking for an action packed fighting game? Look no further! Knock your opponents from the platform and win! Use comps, weapons, and jumps. Improve your rating and become the best player!

What is Brawlhalla online?

Brawlhalla is free to play game where you fight your opponents. It is a fun and fast gameplay that is easy to play. It was created by Blue Mammoth Games and became an instant hit.

How to play Brawlhalla online?

If you are looking for fast-paced gameplay and a lot of fun check out Brawhalla! The main objective of this game is to knock your opponent off the stage. If you played Super Smash Bros you will have a lot of fun with Brawlhalla.

What to do to win the whole match? You simply need to knock your opponent as many times as it takes to make him lose all his lives. The winner is the last player standing or the one that has more points.

And the best thing? You can play this game online! Fight with opponents from all around the world and become the best Brawlhalla online player. You can also play in a team of two, so grab your friend, partner or grandma and compete against the other two players. Improve your ranking and climb the ladder of success. You can also form clans with your friends and gain experience of all members! Play Brawlhalla now on Skyegrid .

Are there mods in Brawlhalla online?

In Brawlhalla online you can one of several modes. There are Free-For-All, 1v1 Strikeout, Experimental 1v1, and a new unique mode every two weeks. In Free for all mode, you can enjoy chaos and mayhem as for players knock each other out. In 1v1 Strikeout, players pick 3 characters which they play for 1 stock each. We recommend you try Experimental mod where you will be able to try upcoming features!

How to move around in Brawlhalla game?

Playing Brwahalla online is quite simple. The controls are easy to remember and feature one-button special moves. If you are a new player you will pick up fast and be ready to play against other players.

Can I use weapons in Brawlhalla game?

While the match is on keep your eyes open for weapons. They fall from the sky randomly and you can pick them up. Different weapons have different attacks and can deliver different damage. Each character has 3 special or "signature" moves per weapon, for a total of 6 per character. Try it now and play Brawlhalla online!

Yes, you can. Download our app and play Brawlhalla online. No download needed! Play this and many other games in our app on any device - even mobile!

At this moment you can play Brawlhalla on Nintendo Switch, Xbox One, PS4, and Steam.

At this moment you cannot officially play Brawlhalla with your friends. That means that if you play on your PS4 you will not be able to play with your friend that plays on PC. There is a solution to that! Stop depending on hardware and start playing in the cloud! You will never have to worry about cross-platform blocks any longer!

How to get mammoth coins in Brawlhalla?

Mammoth Coins. Mammoth Coins are a currency that is used in-game in the Store to purchase new Items. Mammoth coins can only be obtained through purchase with real money or being awarded in some official Brawlhalla tournaments.

Is Brawlhalla on xbox?

Yes, it is. You can play Brawlhalla on xbox.